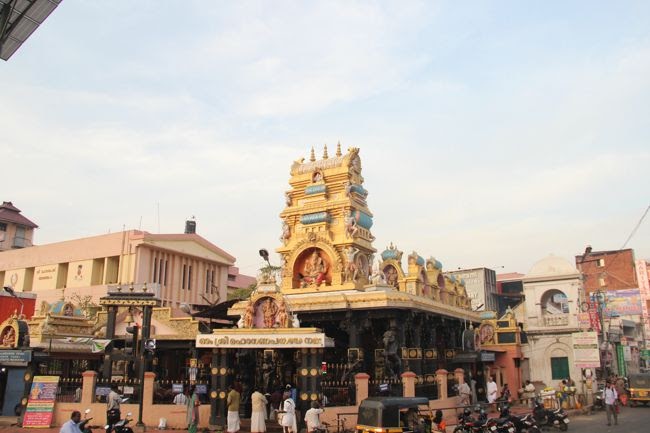 Prakash D March 02, 2019 Fascinating Facts , Ganesha 0 Comments
The Pazhavangadi Maha Ganapathy temple is situated at East Fort in the heart of Thiruvananthapuram City. The main Deity of the temple is Sri Mahaganapathy (Ganesha). The main idol is installed in a seated posture with the right leg in a folded stance. The temple is situated in close proximity to the Sri Padmanabhaswamy temple. Other Deities worshiped at the temple include Dharmasasta, Goddess Durga and Nagaraja. The temple sculptures include 32 different forms of Lord Ganesha. The capital of Kerala, Thiruvananthapuram is known not just for its picturesque beauty but also for its rich culture which is embodied in its many temples. Situated near the famous Padmanabhaswamy Temple is the Pazhavangadi Ganapati Temple which since its very inception has become an important part of the city’s traditions. The practice of breaking a coconut in front of the main deity, Ganapathi or Ganesha before a new beginning has become deeply entwined into the city’s culture.

The temple traces its origins back to Padmanabhapuram which was the then capital of the erstwhile Kingdom of Travancore. Legend has it that the soldiers were disturbed by a Yakshi at night while they were keeping guard at the fort. One night a soldier who was an argent devotee of Lord Ganapathi while taking a bath in the river chanced upon an idol of Ganapathi with the right leg in the folded posture and took it with him to the fort. It is said that he remained unaffected by the Yakshi while keeping vigil that night and since that day all the soldiers began worshiping that idol. Soon a temple was built at that place and the faith of the soldiers in the deity’s powers began to strengthen with every passing day.

So, when in 1795 the then King Karthika Thirunal Rama Varma decided to shift the capital of the Kingdom from Padmanabhapuram to Thiruvananthapuram for administrative purposes, the soldiers of the Travancore Army took their idol along and placed it just outside the boundaries of the main fort. The place Pazhavnagdi derives its name from the words Pazha which means fruit and Angadi which means market. The present temple was built in 1860 under the rule of King Ayilyam Thirunal Rama Varma and the responsibility of managing the affairs of the temple was given to the Travancore Army. When the Nair Brigade went to fight in the First World War, they didn’t leave without making the customary offerings of coconuts to the presiding deity. Famous for breaking coconuts. There is a strong belief that if you break a coconut and ask for a wish it will fulfil soon.

In 1935 when the Travancore Army came to be considered a part of State Forces, the administration of the temple was taken over by the latter. During Second World War when soldiers From Travancore were sent as part of the State Forces, they continued with the tradition of taking blessings of Lord Ganapathi before embarking on the arduous journey. After Indian independence when the forces were merged with the Indian Army in 1949, the responsibility of maintenance of the temple was transferred to the Indian Army. Even to this day when most of the temples are managed by Travancore Devaswom Board, the Pazhavangadi Temple has defied the norms and is being managed by the Army. Over the years, devotees from far and wide have been flocking to the temple to offer their prayers. It is believed that more than 2500 coconuts are offered a day to the deity. The right to take the coconuts offered to the temple is auctioned periodically. The income from this goes to the Madras Regiment of the Indian Army which has formed a Trust to help the needy.

The Pazhavangadi Ganapathy Temple holds a special place in the hearts of the locals and the ardent devotees of Lord Ganesh. The devotees who visit this temple are overcome with the tranquil calm and relentless peace of the magically pious atmosphere. They say that Lord Ganesh fulfils the deepest wishes and fixes the stubbornest problems of his devotees who visit him at the Pazhavangadi Ganapathy Temple.

Pazhavangadi Maha Ganapathi Temple is one of the most famous Lord Ganesh temples in Kerala, situated at East Fort, Thiruvananthapuram. Located in the heart of Trivandrum city, the original idol of the Pazhavangadi Ganapathy Temple is a small idol of Lord Ganesh, with the right leg is in folded posture. The Thiruvananthapuram Central Railway station is closest to Pazhavangadi Ganapathy Temple at a mere distance of 600 meters, an 8-minute walk. You can also opt to travel from Kochuveli Railway Station which is at a distance of 9 kms, approximately 17 minutes by road. Vizhinjam Bus Station is the nearest bus stop to the temple and is only 16 kms away, approximately 30 mins by road. You can hire a cab or auto rickshaw from anywhere in the city at an economic cost and is a speedy and comfortable way to commute to the temple.