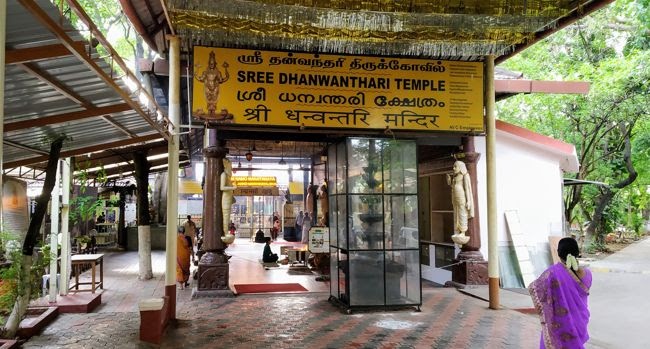 Prakash D March 08, 2019 Remedy Temples , Temples 0 Comments
Parihara !! It has become quite a common word these days among us and we all would have heard this word from any astrologer. Parihara means, it’s a set of actions that needs to be performed in order to remove or reduce the ill effects of doshas that are caused because of the positions of the Planets in ones’ horoscope. Each dosha has its own set of Parihara (i.e.) the type of Parihara to be done depends on of the type of Dosha in the horoscope. We Indians have a strong belief in God and so whenever we face any problem or any issue, we visit a lot of Parihara sthalams and we seek the blessings of God by doing the Parihara. When we start looking at Parihara sthalams, it’s like an ocean and it cannot be compiled or covered at a stretch. Below is the first list on some Parihara Temples (Sthalams) To Visit For Good Health & Curing of Diseases which was published in spiritual magazine. For Part 02 - Coming soon...

Sri Dhanwantari Mandir is situated in the heart of Coimbatore City in the Arya Vaidya Pharmacy Campus with the unique honour of being one of the rare temples devoted to Lord Dhanwantari in the whole world. Lord Dhanwantari is the Upasanamoorthy (Presiding Deity) of Vaidyas of Ayurveda and this temple gives a spiritual background to the Ayurvedic Tradition of Treatment in the Arya Vaidya Chikitsalayam located in the campus. Constructed as per Vaasthu Sasthra the Dhanwantari Temple has Lord Dhanwantari, the God of Life & Medicine as the main deity as well as other sub-deities adorning the power loci of the temple, with a majestic Dhwaja-Stampha or flag-staff. All the deities of this temple have been sanctified therein by famous Tantris and Namboodris from important temples from the adjacent state of Kerala. Lord Dhanwantari is the Adhishtana Devata of Ayurveda the ancient science of Life and is considered to be an Avatar of Maha Vishnu. He is also a great surgeon who taught Ayurvedic Surgery to Susrutha the Father of Ayurvedic Surgery.

The Dhanwanthari Temple has Lord Vasudeva Dharsan and it is a found to be a very famous temple for healing long term illness of devotees and people who visit and worship. It is situated in the heart of the Arya Vaidya Pharmacy road in Olumpus, Ramanathapuram, the Dhanvanthari temple is a one of is prominent in the city of Coimbatore. It is important to note that Lord Dhanwanthri is the lord of well-being which is the main deity worshipped at this temple.

Gunaseelam Vishnu Temple (Abhimana Sthalam) is a Hindu temple dedicated to Vishnu located 20 km (12 mi) from Trichy, in the South Indian state of Tamil Nadu. It is located on the banks of river Kollidam. A visit temple is believed to be a curative to the mentally challenged people, who are taken to the temple and kept in the temple premises for 48 days. At the end of the 48 days it is believed that their illness is cured by the grace of the presiding deity, Prasanna Venkatachalapathi. The temple has set up a mental health rehabilitation centre that has the official stamp of the Tamil Nadu Government license, the first of its kind in Tamil Nadu. The name of the place Gunaseelam derives from "Gunam" (meaning cure) and "Seelam" (meaning place), meaning the place in which illness is cured. "Gunam" also means qualities and "seelam" also means "Assuming a lower position". Hence Gunaseelam is the place where Vishnu comes down and addresses the devotees problems from his heavenly position.

Gunaseelam lies in the stretch between Trichy and Namakkal. Nearest airport and Railway Station is at Trichy. Many buses go to Gunaseelam from morning to night everyday. Buses to selam, namakkal and musuri from trichy are many in numbers and stops at Gunaseelam. Taxi cabs could also be hired from trichy. Prasanna Venkatesa Perumal koil in Gunaseelam is located about 25kms North West of Srirangam on the Trichy- Namakkal- Salem highway on the Northern banks of Cauvery near the Upper Anaicut (Mukkombu). Gunaseelam Vishnu Temple(Abhimana Sthalam) is a Hindu temple dedicated to Vishnu located 20 km from Trichy, in the South Indian state of Tamil Nadu. This century old temple is reputed and blindly believed to cure people from different ailments.

Marundeeswarar Temple is a temple dedicated to Hindu deity Shiva, located in Thiruvanmiyur, Chennai adjacent to the beach of Bay of Bengal. It is one of the 275 Paadal Petra Sthalams and no Navagraha where the three of the most revered Nayanars (Saivite Saints), Appar and Tirugnana Sambandar have glorified the temple with their verses during the 7th-8th century. The temple has been widely expanded by Chola kings during the 11th century. The temple has two seven tiered gateway towers, a huge tank, with the overall temple area covering 1 acre. The Marundeeswarar temple has been a place of curative worship for people with diseases. Marundeeswarar is known so because he imparted sage Agastya on curative properties of various herbs and plants. Since then the Marundeeswarar temple has been a place of worship for people with diseases and various problems with their health. It is said that sage Valmiki, who wrote Ramayana, worshiped Shiva in the temple. Since Valmiki was blessed here, the place was to be known as Thiruvalmikiyur, the name gradually changed to Thiruvanmiyur.

Thiruvanmiyur is situated at a distance of about 29 kms from Koyambedu, Chennai. It is on the ECR (Chennai to Mahabalipuram route). The temple is on the East Coast Road in Thiruvanmiyur located at about 15 Kms from the center of Chennai connected by bus facilities. The East Coast Road starting in Thiruvanmiyur leads to Mahabalipuram and Pondicherry. The area is easily accessible by Metropolitan Transport Corporation (MTC) buses and has a sprawling bus terminus. Town buses available from various parts of the city and very near to Thiruvanmiyur city Bus stand. This temple is well connected by town buses from every part of Chennai city. The temple is situated within ½ Km from Thiruvanmiyur Bus Terminus.