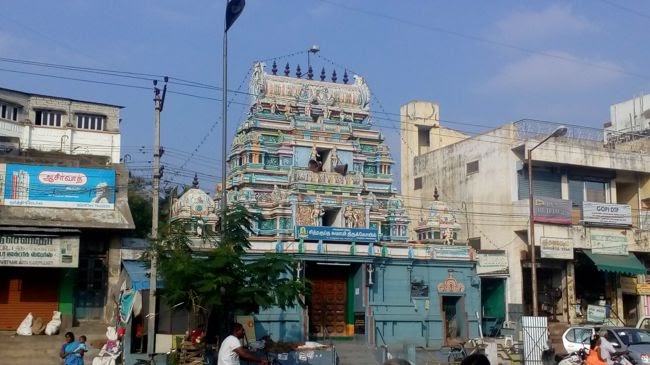 Prakash D March 05, 2019 Remedy Temples , Temples 0 Comments
Parihara !! It has become quite a common word these days among us and we all would have heard this word from any astrologer. Parihara means, it’s a set of actions that needs to be performed in order to remove or reduce the ill effects of doshas that are caused because of the positions of the Planets in ones’ horoscope. Each dosha has its own set of Parihara (i.e.) the type of Parihara to be done depends on of the type of Dosha in the horoscope. We Indians have a strong belief in God and so whenever we face any problem or any issue, we visit a lot of Parihara sthalams and we seek the blessings of God by doing the Parihara. When we start looking at Parihara sthalams, it’s like an ocean and it cannot be compiled or covered at a stretch. Below is the second list on some Parihara Temples (Sthalams) To Visit For Longevity Or Dheerga Ayush which was published in spiritual magazine. For Part 01 - Click Here

Chitragupta temple is a Hindu temple located in Nellukara Street Kanchipuram in the South Indian state of Tamil Nadu. It is one of the rare temples of the Hindu deity Chitragupta, considered to the assistant of Yama, the Hindu god of death. Chitragupta is believed to have emerged from a painting and set as the accountant of good and bad deeds of human beings by Shiva. The temple has a three-tiered Rajagopuram (gateway tower) and a single precinct around the sanctum. The major festival celebrated in the temple in Chitra Pournami during April. The temple is one of the most prominent tourist attractions in the city. Chitragupta, as per Hinduism is the accountant of Yama, the death god, who keeps track of good and bad deeds of human beings to decide their residence in heaven or hell. The temple is just one of its kind that has a separate temple for Chitragupta.

Kancheepuram is not only famous for its numerous Shiva and Vishnu temples but it has also has a magnificent temple for Chitragupta. Chitragupta temple is adjacent to the Kanchipuram Central Bus Stand. The closest located Railway Station is the Kanchipuram station while the nearest airport is the Chennai Airport. Chitragupta Temple is located very near to main bus stand near the Rettai Mandapam.

The temple was built during the Pallava reign and was repaired and rebuilt during the Chola reign. The temple complex consists of a main temple complex and a tank. The Temple traces its mythology to that of Lord Yama (God of Death) who is said to have installed this Lingam and prayed to Lord Shiva for forgiveness and restoration of his strength after he was kicked on his chest by Lord Shiva in Thirukadavur at the behest of saving the life of Sage Markandeya. Lord Yama having lost his strength is said to have created a Tank (Yama Theertham) and installed this Lingam and had fervently prayed to Lord Shiva for forgiveness and restoration of his strength so that he can carry out his duties in full measure. Pleased by his prayers Lord Shiva is said to have granted a Staff (Dhandam) to Lord Yama in this place and restored his strength and hence the name Dandeeswarar - or bestower of mythical staff. The Lords Consort is Goddess Karunambika (Merciful Mother).

Dandeeswarar Temple (Shri Dandeeswarar Temple) is a Shiva temple situated in Velachery, a suburb of Chennai. It is 2 kilometers towards the east from Guru Nanak College on the Velachery main road. The Temple is located in Velachery, Chennai on the way from Saidapet towards Pallikaranai. Lot of Town buses available from various parts of Chennai City to Velachery and the bus stop is Gandhi Road or Dhandeeswaram bus stop between Gurunanak College and Vijaya Nagar Bus Terminus. The temple is located in the Rajbhavan-Vijayanagar Bus stand road, about 1.5 Kms from the Vijayanagar Bus Stand. Those coming from southern district may get down either at Tambaram or Guindy stations. There are bus facilities from these places to the temple. Nearest Airport is Chennai Airport

This ancient temple is situated on the northern bank of the river Kollidam. This temple complex is spread over sprawling 12 acres of land. The temple’s main tower is believed to have been built by King Konerinmai Kondaan and it is only constructed up to the first tier. Lord Yama’s shrine is in the form of a cave (“Gunabaram”) and is said to have been constructed by King Mahendra Varma Pallava in 640 AD. As the Sthala Viruksham of this temple is the “Gneeli” plant, this place gets the name “Thiru Paingneeli”. “Gneeli” is a variety of plantain and “Pain” means lush green. As per the sthala puranam, Lord Shiva reinstated Lord Yama here after he was vanquished in order to save Markendaya’s life in Thirukadaiyur. The legend is that after Lord Yama’s death, his work had stopped and there was no one to take care of the cycle of life and death. Lord Mahavishnu, Bramha, Bhoomadevi, and Devas came to this temple and urged Lord Shiva to give rebirth to Yama. Lord Shiva gave rebirth to Yama on the day of Thai Poosam and gave him the powers to restart his work. Hence the lord here is praised as “Sri Adhikaravallavar (“athikaram” means power in Tamil).

Sri Vanchinadha Swamy temple is a temple dedicated to Lord Shiva. It is located in Srivanchiyam, Tiruvarur District, Tamil Nadu. The presiding deity of the temple is Lord Shiva in the name of Vanchinathan and the name of the Goddess is Mangalambika. The sthala vriksham (sacred tree of this temple) is Sandalwood tree. The sacred tank of this sthalam (place) is called the GuptaGangai. It is one of the rare temples where there is a separate shrine for Yama, the Hindu god of death. Yama is sported in seated posture with Chitragupta by his side. Gupta Ganga, Yama Theertham, Agni Theertham and Lakshmi Theertham are the various bodies of water associated with the temple. Masimagam is the most prominent festival in the temple when the festival image of Shiva is taken in the mount of Yama around the streets of Srivanchiyam. It has two nandhi's facing both sides of Vanchinadha. Rahu-Ketu, carved out in a composite sculpture. A separate sannathi for Shani. This temple is one of the six temples along the banks of the Kaveri which are considered equivalent to the Kashi Vishwanath Temple.