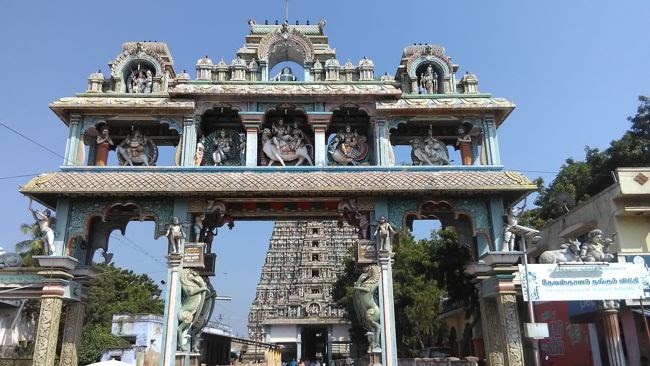 Prakash D March 04, 2019 Remedy Temples , Temples 0 Comments
Parihara !! It has become quite a common word these days among us and we all would have heard this word from any astrologer. Parihara means, it’s a set of actions that needs to be performed in order to remove or reduce the ill effects of doshas that are caused because of the positions of the Planets in ones’ horoscope. Each dosha has its own set of Parihara (i.e.) the type of Parihara to be done depends on of the type of Dosha in the horoscope. We Indians have a strong belief in God and so whenever we face any problem or any issue, we visit a lot of Parihara sthalams and we seek the blessings of God by doing the Parihara. When we start looking at Parihara sthalams, it’s like an ocean and it cannot be compiled or covered at a stretch. Below is the first list on some Parihara Temples (Sthalams) To Visit For Longevity Or Dheerga Ayush which was published in spiritual magazine. For Part 02 - Click Here

Sri Amirthagateswarar Abhirami Temple is a Hindu temple dedicated to Shiva in his manifestation as "Destroyer of Death" and his wife Parvati as Abhirami. It is located in Thirukkadaiyur (Thirukadavur), 21 km East of Mayiladuthurai, Tamil Nadu in India. This temple is associated with the legend of Shiva saving his young devotee, Markendeya from death, and the tale of a saint, Abirami Pattar a devotee of the presiding goddess. The temple complex covers 10 acres and has two gateway towers known as gopurams. The tallest is the eastern tower, with 11 stories and a height of 46 metres (151 ft). The temple has numerous shrines, with those of Amirthaghateswarar and Abhirami being the most prominent. This temple is very famous for celebrating 60th and 80th birth anniversaries.

There are three temple tanks, or teerthams, known as 'Amrita Pushkarini', 'Kaala Theertham' and 'Maarkandeya Theertham'. There is a separate shrine dedicated to Abhirami. The Shakta saint Abhirami Pattar is believed to have rendered the Abhirami Anthathi in the front hall of the shrine. The temple also maintains a separate shrine for Markandeya worshipping Kalasamhara Murti. Although Thirukadaiyur is a Shaiva temple, it contains an old Vaishnava temple. The gods in this temple are Amrita Narayana (Vishnu) and his consort Amrita Valli (Lakshmi).

Thirukadaiyur Temple is one of the Eight Viraattanams shrines dedicated to Lord Shiva (His Avatharams) and located in between Sirkali and Karaikal while coming via ECR and 20kms away from Mayiladuthurai and in between of Chidambaram and Kumbakonam region, Tamilnadu, India. The road transport by own vehicle is the best means of transport to reach Thirukadaiyur temple. There are regular buses to Thirukadaiyur City from other major cities of the country. The temple is 15km away from Kariakal, and one can take bus from here. There is no railway station at Thirukadaiyur. The nearest railway station to reach this place is at Karaikal. One can even get down at Mayiladuthurai station while travelling from Trichy. The pilgrims can also get down at Nagore. There are no regular flights to Thirukadaiyur from other major cities of the country. The nearest airport is Pondicherry Airport and other is the Tiruchirapalli Airport (145km).

The main God here is Emaneswaram Udayar and Amman (Thayar) is Swarna Gujambikai. Lord Shiva who was a Samharamurthy (destroyer) in Tirukadayur by punishing Yama, graces as Anugrahamurthy (protector) in this temple seated under the Indra Vimana in the sanctum sanctorum. Devotees pray here for longevity and for relief from the adverse aspects of planet Saturn. It is believed that performing Ayush Homa, celebrating 60th and 80th birthday in the temple would bless the devotee with longer life. On the Masi Magam day, as representative of Lord Shiva, Lord Muruga considered to be Shiva Himself, visit the Theetham event. Annabishekam is performed to Lord Muruga on the last Monday of Karthikai month in December. Vinayaka of the temple is praised as Lord Raja Ganapathy.

Mother Swarna Gujambal with two hands blesses devotees from a separate shrine. Those facing delays in wedding and concerned with child welfare tie mangal sutras and bangles in Mother’s shrine for relief.

The Kaalakaleshwara Temple dedicated to Lord Shiva, is built by Cholas during 8th century A.D, lies on the banks of the Kousika River at Kovilpalayam. Dakshinamoorthy statue in this temple is believed to be the largest Dakshinamoorthy statue in Asia . People from all over Tamil Nadu and from other states visit on Pradosham day festivals. This temple is nearly 2000 years old. History is that Yamaraja dedicated a shivlingam and prayed here to get absolved from the punishment of Lord Shiva. As Shiva is said to be the master of Yama (Kalan), the temple got its name as Kaalakaaleswarar temple. Marriage Pariharams, 60th, 80th anniversaries is also done grand on prior booking. The Siva Lingam is made of spume. So, here in the temple they do not use Curd, Ghee and Panchaamritham for Abishekam. This Siva Lingam was worshiped by Yama and it was installed in this place by Viswamitra Muni.