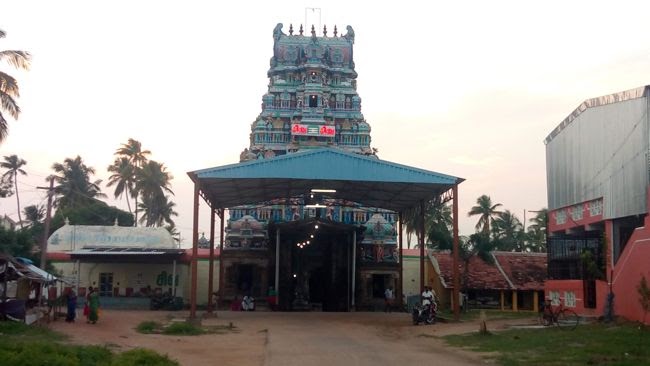 Shiva Lingam With Biggest Aavudayar (the seat or throne on which the Lingam is installed) - Sri Vruddhapureeshwarar Temple - Thirupunavasal, Pudukkottai

Prakash D February 24, 2019 Shiva , Tamil Nadu 0 Comments
Thirupunavasal Siva Temple is located around 25 Kms from Thiruvadanai. The main presiding deity is Vruddhapureeswarar or Pazhampathinathar and the Ambal is Perianayaki. The Lingam in Thirupunavasal is 9 feet tall (the third tallest lingam in Tamilnadu). The Avudayar is 82.5 feet round. Compared to this, the Lingam in Thanjavur Big Temple which is 12.5 feet tall & the one in Gangaikondacholapuram which is 13.5 feet tall. This temple is one of 275 Thevara sthalams and is also one of the Pandi Padinalu (14 Thevara sthalams in Pandinadu). To perform the Abishekam to Lord Shiva, ladders are formed around the Avudayar to reach the height. The priests stand on the ladder and perform the Abishekam.

The unique feature of this temple is its biggest Suyambhu Lingam. More than that, another interesting fact is that the lingam still grows in height. A few years back they made alterations to the Nagabharanam (The snake ornament that is seen on the Shiva Lingam) as the lingam grew. It is said that the Lingam grew again and so they are going to make some more attachment to the Nagabharanam. It is really amazing to hear such facts!! It is also believed that the King Raja Raja Chozan designed the Shiva Lingam of the Thanjavur Brahadeeshwara Temple after visiting this temple.

As per the Sthala Purana, Lord Brahmma lost his position as Creator as he was not able to explain the meaning of the Pranava Mantram. As advised by the Goddess Parvathi, He came to earth, installed a Shiva Lingam and worshipped to get back his position. Lord Brahmma also created a spring to draw water for the Abishekam of Lord Shiva. Since the spring was created by him, it is called Brahmma Theertham. Also, since Brahmma has four faces, He made the Lingam also with four faces. Hence the Lingam came to be known as Chaturmukha Lingam – Chaturmukha – four faces. It is said that this was the Lingam worshipped by the devotees in the early days. You could still see this Lingam in the temple.

The temple is believed to be some 2000 years old. Later during the reign of the king Sundara Pandian, He built the temple combining the traditions of both the Pandyas and the Cholas. Since the temple combines the architecture of both the Cholas and the Pandyas, the Rajagopuram (the main temple tower) and the main Vimana (Gopuram of the main Sanctum) are taller. Lord Shiva is named as Vruddhapureeshwarar considering the age of the temple. Vruddha means Old. In Tamil, He is known as Pazhampathinathar. It is said that Lord Brahmma, Goddess Lakshmi, Maha Vishnu along with Indra, Surya, Chandra, Yama, Airavatham, Vasishta and Agasthyar worshipped Lord Shiva here. So, this temple has totally 10 Theerthams, unlike the other Shiva temples that might have a maximum of 3 or 4 Theerthams. The names of those temple Theerthams are Indra Theertham, Ganga Theertham, Brahmma Theertham, Chandra Pushkarni, Lakshmi Theertham, Surya Pushkarni, Chakra Theertham, Sarpa Nadhi (Pambu Aaru), Kalyana Theertham and Varuna Theertham.

Since this Kshethram came much before Thiruvannamalai, there is no Lingothbhavar in this temple. Instead of that, we have the shrine of Maha Vishnu in that place. This temple is also called Vruddha Kasi meaning Older Kasi. It is believed that this place existed much before Kasi. The river Pambaru (Pambu Aaru) flows south of the temple. The sea is at a distance of 3kms. Since this place is located just at the entrance of the river into the sea, it is named as Thirupunavasal (Punal – Entrance).

The main Goddess of the temple is Periyanayaki or Brahannayaki. She graces Her devotees from a separate shrine facing east. Opposite to the Goddess’s shrine is the shrine for Goddess Kali. She is known as Kudavarai Kali. It is said that we cannot worship the Kali directly since she is said to be Furious in Nature (Ugram). So we would be able to have the full darshan of the Goddess Kali through the mirror that is placed in front of her. Devotees performing Valaikappu-Seemantham for pregnant women offer the first bangles to the Goddess here. By doing so, it is strongly believed that the Goddess would Grace the safe delivery of the baby.

There are shrines for Pancha Vinayaka, 9 sons of Sage Kabila, idols of the Nayanmars, Dakshinamurthy, Narthana Vinayaka, Lord Muruga with his consorts Valli and Deivanai, Lord Brahmma, Chandikeswarar, Goddess Gajalakshmi and Lord Hanuman.

Coming to the main God, Lord Shiva!! He graces His devotees in the form of Suyambu Shiva Lingam. As mentioned earlier, it is believed that the Chola King Rajaraja Chola built the Thanjavur Bragadeeswarar Temple after visiting this temple. Later His son Rajendra Chola built the Gangaikonda Cholapuram with the Shiva Lingam that is bigger than the Thanjavur Shiva Lingam. The Lingam in the Thanjavur Brahadeeshwara Temple is 12.5 feet tall and the one in Gangaikondacholapuram is 13.5 feet tall. The circumference of the Aavudayar (the seat or throne on which the Lingam is installed) is 60 feet round in these temples. But when it comes to the Thirupunavasal Temple, the Shiva Lingam is 9 feet tall and the Aavudayar is 82.5 feet round. So, while dressing up the Aavudayar, they need 2 people. One has to hold the Dhoti while the other has to go round to cover the Aavudayar. The Lingam requires 3 Muzham (a scale of measurement) cloth and the Aavudayar requires 30 Muzham cloth to wrap around. A Muzham is approximately 2.75 Feet. Based on this measurement, they require around 90 feet Dhoti for dressing up the Lord. So the devotees place orders with the weavers for a 90 feet dhoti and offer it to the Lord. Abishekam to the Lord will be performed by standing on the ladders that are built around the Aavudayar.

It is located 70 kms from Pudukkottai and 30 kms from Avudaiyarkoil. The Shiva temple here is called Viruthapuraswarar Koil. Those going to Thirupunavasal from Chennai and Puducherry should reach Pudukottai via Trichy and then reach Aranthangi 30 Kms far from there. Buses are available here for Thirupunavasal 42 kms from then. Those going from Madurai should reach Aranthangi via Karaikudi and then reach place. Bus facilities are conveniently available. This temple can be reached by travelling from Aranthangi to Meemisal (38 kms) and from there to Thiruppunavayil (12 kms). Nearest railway Station is Aranthangi ; Nearest Airport is Trichy.