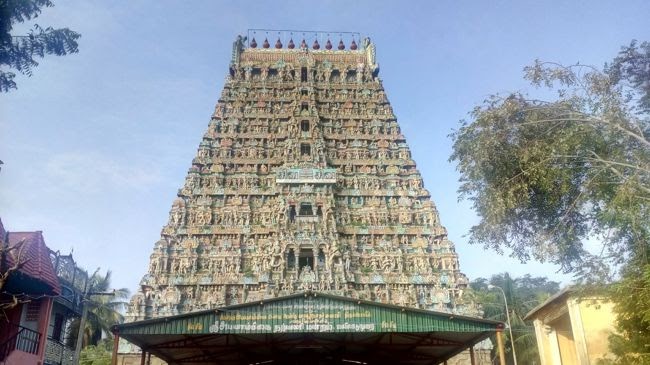 Prakash D February 26, 2019 Fascinating Facts , Shiva 0 Comments
Mayuranathaswamy Temple, Mayiladuthurai or Mayuranathar Temple is a Hindu temple in the town of Mayiladuthurai (formerly known as Mayavaram or Mayuram) in the Nagapattinam District of Tamil Nadu in India. The temple is dedicated to Lord Mayuranathaswamy, a form of Shiva, and has given its name to the town itself. The main icon is a lingam and the presiding deity is called Mayuranathar because the Hindu goddess Parvathi worshipped Shiva here in the form of a mayura. On the day of the new moon in the Tamil month of Aippasi (November–December), religious Hindus have a ceremonial bath in the temple tank as it is believed to purify them from sins. An annual dance festival called the Mayura Natyanjali festival is celebrated within the precincts of the temple each year. This temple is one of the six temples along the banks of the Kaveri which are considered equivalent to the Kashi Vishwanath Temple.

A physically handicapped couple from Vriddachalam – Natha Sarma and Ana Vidya went to Thiruvayaru to have darshan of the Theerthavari Utsavam. From there, they came here to the Mayuranathar temple to witness the last day of the Theerthavari. But as they reached, it seemed that the utsavam had just concluded. Saddened by this, they slept on the banks of the Cauvery. Pleased with their devotion, the Lord appeared in their dream and indicated to them that the new month had still not begun and that they should bathe early in the morning and promised to give them both an early morning darshan before the start of the new month.

When they wanted to head back to Thiruvaryaru, Lord Airaappar indicated that he himself will come there and provide darshan to them at Mayliduthurai. Thus one finds an Airaarappar temple in Mayiladuthurai as well. It is now a sub temple here. In memory of this event, there is a separate sannidhi for both at this temple. To the right of Ambal is Ana Vidya seen in a linga form. A special feature at this temple is the draping of a red saree for the linga idol.

Mayiladuthurai (or Mayavaram) is located approximately 260 km from Chennai, 40 km from Chidambaram and 35 km from Kumbakonam. While the town has its own share of prominent temples, it is also a hub for visiting other temples nearby. Located 5kms South West of the railway station is the over 1000 years old Mayuranathar temple in Mayiladuthurai, a temple praised by Thiru Gnana Sambanthar and Appar in 30verses as ‘Vallal Mayiladuthurai’ and the Lord as one providing relief from Navagriha Dosham.