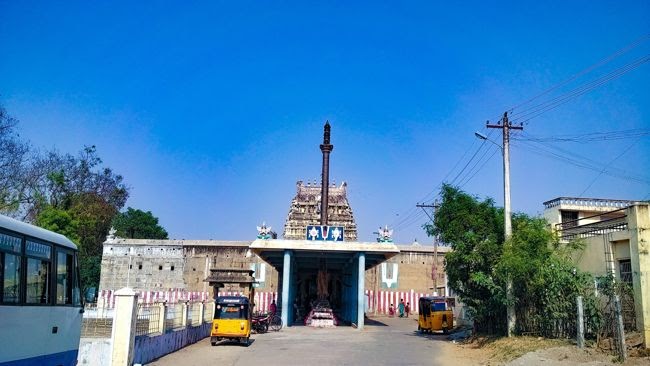 Prakash D February 24, 2019 Tamil Nadu , Unique Temples 0 Comments
The Moolavar here is Vijayaraghava Perumaal in a seated posture facing east, and Taayaar is Maragatavalli in a separate sanctum to the right of Perumaal's sanctum. The sanctum bears an image of Vishnu with Jatayu on his lap. Sridevi's and Bhu Devi's positions are reversed. This east facing temple has two prakarams and imposing walls and a three tiered rajagopuram. There is a shrine to Jatayu. On new moon days, where the departed souls are remembered with rituals, several congregate at the Jatayu theertham. Legend has it that when Rama, estranged from Sita performed the last rites to the bird Jatayu here, Jatayu is believed to created the Jatayu theertham here. The name Tirupputkuzhi arises out of the shrine's association with Jatayu.

Emperuman, Sriman Narayanan born to King Dasaratha as Sri Ramar, left all of his properties and went to the forest as told by his father. When they went to the forest, Seetha pirattiyaar asked for the deer, which was actually not the deer, but it was Maareeshan, sent by Ravana. Then, Ravana came to Seetha piratti and took her along with him to Lanka, On the way to Lanka, Jadayu, the Eagle bird stopped him and fought with Ravana to release Seetha. But, in the end, Jadayu's wings were cut by Ravana and fell down on the earth. When Rama along with Lakshmana came there in search of Seetha Piratti, they found Jadayu fell down in the Land. Jadayu told that Ravana has took away Seetha along with him and on finally telling this, he died. Since, Lord Ramar gave the Sthanam (level) to Jadayu as his father, he did all the final ceremony to it and stayed there for a while. As sugessted by Jadayu, the Perumal here gives his seva in the form in which he did the final funeral to Jadayu.

Lord Vijaya Raghava Perumal blesses the devotees with Jatayu on His lap. During all Perumal processions, due regard is offered to Jatayu also. As this is the place where Lord Rama performed the last rites for Jatayu the eagle who fought with Ravana to rescue Sita from him and sacrificed his life in the service of the Lord, as a mark of honour to him, the flag post and the Balipeeta are outside the temple.

The stone structure here dates back to the period of Sundara Pandyan as testified by several inscriptions; renovations were carried out here in 1955. An interesting belief holds here. Barren women desiring progeny worship here and are given a prasadam of roasted soaked lentils. It is believed that if these roasted lentils sprout, the worshipper would conceive and beget children. Two worship services are carried out here each day. The Vimana the tower above the sanctum sanctorum is of Veerakoti design. People pray for child boon. This is also one of the holy places to offer Tarpan to ancestors.

Mother is greatly praised by the devotees for Her grace and power of germinating even fried pulse. The custom followed in the place is strange. Women use to have a dip in Jayayu Theertham, go to sleep at night with fried pulse tied in the sari. If they find the pulse germinated when they wake up in the morning, it indicates child boon granted. Yadava Prakasa, the Guru of Acharya Ramanuja lived here. here is a stone horse vahan in the temple with moving limbs, a wonder in Tamil Sculpture. The sculptor, after making this horse, vowed not to make one such till his death. As a mark of respect to the sculptor for his skill and determination, Lord visits the street named after the sculptor on the 8th day of the festival. People believe that performing tarpan to ancestors on the new moon day in this place would bring them double benefit, as Lord Rama performed last rites to Jatayu in this place.

King of birds, Jatayu fell down almost dead while fighting with Ravana abducting Sita. While Lord Rama and Sri Lakshmana were searching for Her, they met Jatayu who informed them of what happened. He shed his mortal coil begging the Lord to perform the last rites to him and grant Darshan with Mother Sita. Lord Sri Rama had Jatayu by His right, lit the pyre and performed the rites. Unable to bear the heat of fire, Mother Sridevi moved to left of the Lord from right and Bhoodevi Thayar moved to the left from the right, according to scriptures. Based on the story, Thayar shrine is at the left of the Lord and that of Sri Andal is at the right in the temple. For water needed for the rites, Lord Rama shot an arrow and created a spring, now called Jatayu Pushkarini. Tiru in Tamil is a honorific prefix, Pul means bird and Kuzhi the pit. The place is thus named Tiru Pul Kuzhi-Tiruputkuzhi.