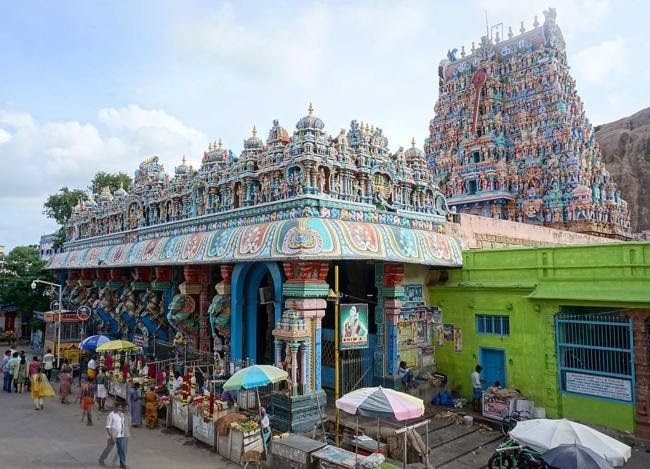 Abhishekam Is Performed Only To The Vel Weapon Of Lord Muruga - Subramaniya Swamy Temple - Thiruparankundram, Madurai

Prakash D February 28, 2019 Fascinating Facts , Muruga 0 Comments
Tirupparankunram Murugan Temple is a Hindu temple and one of the Six Abodes of Murugan, located at Tirupparankunram. The temple is built in rock-cut architecture and believed to have been built by the Pandyas during the 6th century. According to the legend it is where Murugan slayed the demon Surapadman and married Deivayanai, the divine daughter of the king of heaven, Indra, and he is said to have worshipped Shiva here as Parangirinathar. Thiruparankundram is considered the first of the Six Abodes of Lord Murugan (Arupadai veedu). A cave temple is dedicated to the element of earth and mentioned in various classical Tamil texts as the 'Southern Himalaya' where the gods assemble. The Temple was built by Maravarman Sundara Pandiyan and is a hill-temple (1050 feet above sea-level) carved out of a hillock.

In this temple, Lord Murugan is called as Subramanya. He married Deivayanai daughter of Lord Indira after the victory of Lord Subramanya over Surapadma. The marriage took place at Tirupparankundram,. All arrangements for marriage were made and the marriage was performed at the Tirupparankundram Temple. The marriage of Subrahmanya and Deivayanai was attended by Lord Siva, Parvathi, Lord Vishnu and Narathar. Since then, the temple has become a very famous abode of Lord Subramanya. Tamilians have considered it the most auspicious place for their own marriages, especially during the time of the Pankuni Uttiram, the festival of marriage held in late March.

Abishek is performed only to the Vel weapon of Lord Muruga as this is a cave temple. The Vel is taken to the Kasi Viswanatha shrine in the hill on the last Saturday of Purattasi month (September-October). This is the only temple where abishek is performed to Vel. Only a scented paste called punugu is applied on the Lord as this is a cave temple. More importance is attached to Vel as the Lord came to this place victoriously after defeating the demon Surpanma with the power of this weapon. Recently, a golden car has been made for the temple. As a prayer commitment to take Muruga in procession on this golden car, devotees may register in advance.

The temple is located 8 kilometres (5.0 mi) from Madurai in India. In the main shrine, apart from Muruga, deities of Lord Shiva, Lord Vishnu, Lord Vinayaka and Goddess Durga are housed. The other Arupadaiveedu's dedicated for Lord Muruga are Thiruchendur (100 km south of Madurai), Palani (120 km west of Madurai), Swamimalai (150 km east of Madurai), Thiruthani (50 km from Chennai) and Pazhamudircholai (10 km north of Madurai). Buses are available from Madurai Periyar bus stand. All the buses moving from Periyar bustand to Thirumangalam go through Thiruparangunram. Thiruparankundram Railway Station is in between madurai and thimangalam railway stations, on the chennai-kanyakumari railway track. Madurai Airport is about 10 kms in the south east direction.