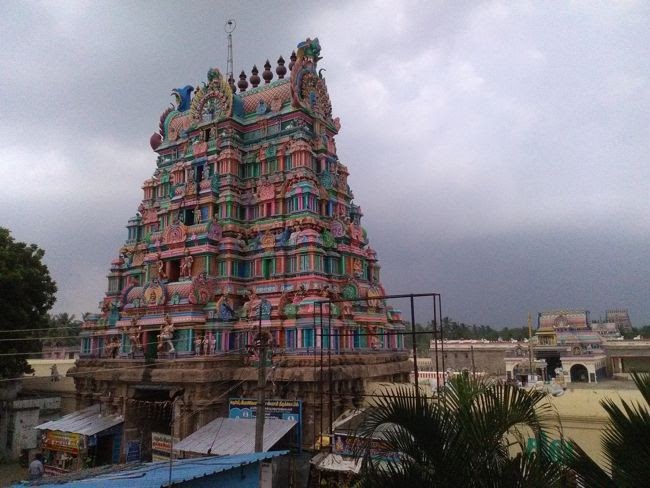 Only Temple Where One Can Have Darshan Of Agora Murthy, One Of The 64 Idol Forms Of Lord Shiva - Sri Swetharanyeswarar Temple - Thiruvenkadu, Nagapattinam

Prakash D December 28, 2018 Shiva , Tamil Nadu 0 Comments
This temple is mentioned in Valmiki Ramayan and Silapathikaram. This underscores the antiquity of this temple. The name of this place in Sanskrit is “Swetharanyam” (“Sweth” means white and “Aranyam” means forest). In Tamil, this can be translated as “Venmai” meaning “white” and “Kaadu” meaning forest. Hence this place is called “Thiru Venkaadu”. The lord here is known as “Sri Swetharanyeswarar”. Lord Shiva here is also praised as Thiruvenkaadar, Thiruvenkaattu Devar, Thiruvenkaadaiyar and Thiruvenkaattu Peruman. This temple’s campus covers an area of almost 12 acres. The rivers, Kaveri and Manikarnigai, flow near this holy shrine. It is believed that taking dip in the river Manikarnigai is equivalent to taking dips in the 64 bath ghats in Kasi.

The legend relating to Swetharanyeswarar temple in Thiruvenkadu dates back to a period in the Ramayana. Valmeeki makes a comparison in the Aranya Canto of Rama Killing Khara and Dhoosana to the way Swetharanyeswara killed Yama at Thiruvenkadu. Three Lords (Swetharanyeswarar, Natarja and Agora Murthy), Three Theerthams (Soma, Surya, Agni), Three Sthala Vriksham (Vadalal, Konrai,Vilvam), Praise by Four Saint Poets are special features of the temple. Lord Shiva provides darshan here in five different postures. In the ‘Easaanam’, a posture representing purity, the Lord is seen facing the sky. Other postures include Vaamadevam facing the Northern Direction and representing Nourishment, Tatpurisha facing the East and representing Spirituality and Destruction of ‘Ego’. Sadyojatam is a West facing posture representing Creation.

The most differentiating feature is the tall 7 feet Lord facing the South where he is seen in a Destructive Posture referred to as Agora Murthy, a manifestation of Shiva’s anger. Agora Murthy is believed to like Mohana Ragam and hence it is this Ragam that is played when the deepam is shown to this Lord each day. This is the only temple where one can have the full fledged darshan of the tall ‘Agora Murthy’ one of the 64 idol forms of Lord Shiva.

Another legend associated with this temple is that of demon Maruthuvan, son of demon Salanthiran. Maruthuvan was a staunch devotee of Lord Shiva. He performed rigours penance and was blessed with a trident (“Soolam” in Tamil). After receiving this blessing, he started terrorising the Devas. On the request of Devas, Lord Shiva instructed Nandhi to punish Maruthuvan. In the fight that ensued, Maruthuvan hit Nandhi in 9 places with the trident. On knowing this, Lord Shiva took the form of “Aghoramurthy” and vanquished the demon. This Murthy is the furious incarnation of Lord Shiva. It represents one of his five faces - “Aghoram”. It is believed that Lord Aghoramurthi killed the demon under a tree here. This tree can still be seen in the temple. The idol of Nandhi which is in front of the lord can be seen with 9 scars on its body.

This temple is very famous for Lord Budhan. It is one of the Navagraha temples. Lord Budhan’s shrine is situated to the left of Goddess Parvathy’s shrine. Lord Budhan is the son of Lord Chandran. Lord Chandran’s shrine and Chandra Theertham are located just opposite to Lord Budhan’s shrine. A large number of devotees can always be seen in this shrine. This temple is called “Aadhi (first) Chidambaram” because it is believed that Lord Shiva performed his dance here before performing it in Chidambaram. Similar to Chidambaram, there is a shrine for Lord Vishnu near the Natarajar’s shrine. “Shiva Thandavam” festival is also celebrated here as in Chidambaram. The idol of Natarajar is very beautiful. The poojas and festivals for Lord Natarajar here are similar to those in Chidambaram. Here also we can see “Spadika Lingam” and “Chidambara Rakashiyam”. For the Spadika Lingam, abhishekams are performed four times every day. For the Natarajar, only six abishekams are performed in a year.

It is considered very auspicious to worship the lord here after taking a dip in all the three Theerthams. Devotees believe that by doing so they will be blessed with prosperity. It is also considered beneficial for the betterment of their children. In his hymn, Saint Thirugnanasambanthar also sang about the benefits of worshiping the lord here. Special poojas called “Agorapoojai” are performed during midnight on the 3rd Sunday in the Tamil month of Karthigai (Nov-Dec) to Lord Agoramurthy. Worshiping the lord during this pooja is believed to be very auspicious.

Sri Vallabha Ganapathy (Sri Vallabha Devi with Sri Ganapathy) is housed in a shrine which looks like an old and traditional house. It is actually a granary for storing cereals and paddy. Worshiping this Vinayakar will lift one from the clutches of poverty. Since Lord Vinayakar can be seen along with his wife here, devotees believe that worshiping them will help in removing obstacles from marriage proposals.