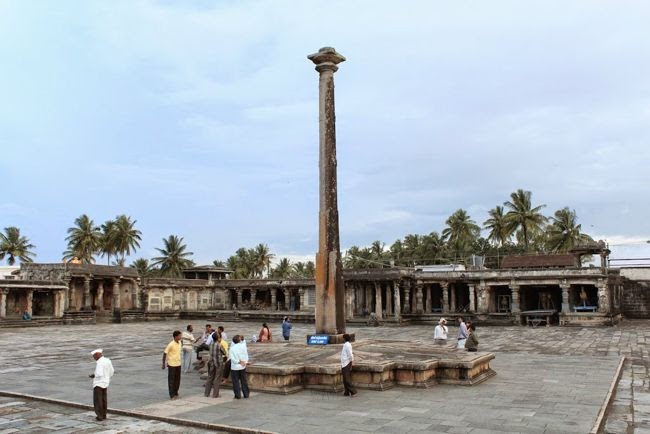 The Gravity Pillar Which Does Not Have Foundation Below It - Sri Chennakeshava Temple - Belur, Hassan

Prakash D June 11, 2018 Fascinating Facts , Karnataka 0 Comments
The Chennakeshava Temple, also referred to as Keshava, Kesava or Vijayanarayana Temple of Belur, is a 12th-century Hindu temple in the Hassan district of Karnataka state, India. It was commissioned by King Vishnuvardhana in 1117 CE, on the banks of the Yagachi River in Belur also called Velapura, an early Hoysala Empire capital. The temple was built over three generations and took 103 years to finish. It was repeatedly damaged and plundered during wars, repeatedly rebuilt and repaired over its history. It is 35 km from Hassan city and about 200 km from Bengaluru. The temple is dedicated to Vishnu and has been an active Hindu temple since its founding. The temple is remarkable for its architecture, sculptures, reliefs, friezes as well its iconography, inscriptions and history. The temple artwork depicts scenes of secular life in the 12th century, dancers and musicians, as well as a pictorial narration of Hindu texts such as the Ramayana, the Mahabharata and the Puranas through numerous friezes.

The Garuda Sthamba (Sacred pillar) facing the main temple was installed during the Vijayanagar period, whereas the Deepa Sthamba (pillar of lights) was installed during the Hoysala period. The Deepa Sthamba is 42 feet tall and known as pillar of Gravity as it has no foundation and stands on 3 points touching the pedestal. The whole weight is balanced and is standing upright on its own. Gravity Pillar or Lampost - Mounted on a star-shaped platform is a huge 42m high pillar or lamp post. This is right in the middle of the temple courtyard and the most amazing thing about this is - the pillar stands on its own! It does not have a foundation below it and since, it stands erect on its own weight, it is called as the gravity pillar.

The pillar is supported on 3 points. The 4th point doesn’t touch the ground. Science plays its role here – the center of gravity is such that the 3 points balance the pillar. It is interesting to think of how this pillar was put up in the first place – about 800 years ago. And quite a good scientific method used to have the pillar built (monolithic structure) which ensures the centre of gravity rests on 3 points. This pillar located inside Chennakesava Temple (Keshava Temple). Visitors should avoid the temptation to knock this structure over :) - this baseless, foundation less 42 foot pillar just stands on a stone platform, held there by gravity. It has been standing since the reign of King Devaraaya in 1414. The column is made out of granite and stands tall above the other temples.

The Chennakeshava Temple is located in Belur taluk in Hassan district of the Indian state of Karnataka. It is about 35 kilometres (22 mi) northwest of Hassan. The temple is about 16 kilometres (9.9 mi) from Halebidu temples. Belur has no nearby airport, and is about 200 kilometres (124 mi) west of Bengaluru, about 3.5 hours drive accessible with a four lane NH75 highway. Hassan is the closest city near Belur that is connected by railway network to major cities of Karnataka. The Chennakeshava Temple is an active Hindu temple and a major Vaishnava pilgrimage site. It is located on the banks of Yagachi River (also called Badari River in historic texts), a tributary of Hemavati River.