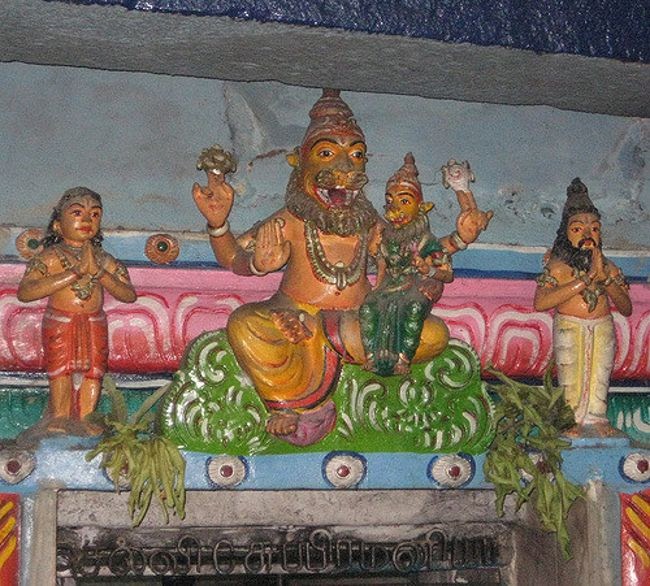 Goddess In The Lap Of Lord Narsimha Also Has A Lion Face In This Temple - Sri Lakshmi Narasimha Swamy Temple - Avaniyapuram, Tiruvannamalai

Prakash D May 15, 2018 Narasimha , Tamil Nadu 0 Comments
At Avaniyapuram, Lord Narasimha is found in a small cave (technically known as kudavarai koil). A three-tier Rajagopuram welcomes beckons one with its grace and grandeur. We first pay obeisance to Anjaneya before entering the shrine of Lord Narasimha. There is Yoga Narasimha in the same hill at a higher altitude where Lord Venkateswara is housed. Here Lord Narasimha is in a sitting posture, Mahalakshmi Thayar seated on his left thigh. His left arm is around His Consort and His right hand is in abyaha hasta position. His upper hands are holding the chakra and the conch. The unique feature in this temple is that Mahalakshmi Thayar has the face of a lioness. The utsava idol of Lord Narasimha also has the face of a lion. He has four hands and is in standing position flanked on either side by Sri Devi and Bhoo Devi.

The temple is in two levels - on the first level there is the Narasimha shrine and on the second level there is Lord Venkateshwara shrine. The most unique feature here - probably something that cannot be found anywhere else in the world is that not only does Lord Narasimha have the lion face, also the thaayar and Garudalwar are found here with lion face. The event when the Goddess prayed to Lord Narasimha to grant her his face, and obtained it through his blessings is celebrated once in 60 years (the tamil calendar has a 60 year cycle) during Sarvadhari Varusham Aani Maasam. There is a separate shrine for Alarmelmangai Thayar near the Narasimha temple. Lord Venkateswara is atop at the hill. There are five Narasimha moorthies in all looking alike next to the Thayar sannidhi. Thus we have eight Narasimha idols and it makes a total of nine including the Yoga Narasimha atop the hill. We also find idols of Adhi Sesha and Kalinga Nardana Krishna in Pancha Narasimhar sannidhi. The utsava moorthy of Lord Venkateswara blesses us in an astonishing position in the Narasimha Sannidhi itself.

Avani means lion in Sanskrit and hence the name ‘AvaniNarayanapuram and now is Avaniyapuram. During the time of Thretha Yuga Lord Brahma was doing the yaga and at that time from the yaga’s fire Lord Narasimha has appeared in front of him. Due to the heat lord doesn’t had the face when he come up. Seeing this Mahalakshmi Thayar told to Narasimhar that how you will give darshan to bhaktas without face hence please grant me your face to me. Pleased by the Thayar lord gives his face and hence in this Kshetra Thayar with lion face giving darshan to all and this day is celebrated once in 60 Years of Sarvadhari Samvathsarm Aani Month 9th day. Only on this day 4 types of nevedhya prasadam will be offered to lords of this hill temple. For Mahalakshmi Thayar – Sakkarai Pongal ; For Narashimhar – Puliyotharai ; For Srinivasa Perumal – Curd Rice and For Yoga Narashimhar – Ven Pongal. One more is, Lord Narasimha had given darshan to Brigu Maharishi in the form of five Divya desa deities viz Tirupathi Balaji, Sholingur Narasimhar, Kanchi Varadaraja Perumal, Srirangam Ranganathar, and the Ahobilam Nava Narasimhars.

Nava Narasimhar Temple is dedicated to Hindu God Vishnu located at Avaniyapuram Village in Thiruvannamalai District of Tamilnadu. This Temple is also called as Dakshina Ahobilam. It is a small hill with temples at 2 tiers and about 200 steps to climb. Steps can be easily climbed by even older persons also. The first tier has Lord Lakshmi Narasimhar, Alarmel Mangai Thayar and Pancha Narasimhar Sannadhis. The second tier has Sannadhis for Lord Venkateswarar, Sholingur Narasimhar, Varadaraja perumal and Ranganatha Perumal. Avaniyapuram is located at about 20 kms from Cheyyar and is on a small hillock.

Similar to Tirupathi, where Lord Venkateshwara is in Tirumala and Alarmelmangai Thaayar is at Tiruchanur, here Lord Venkateshwara is in the first tier, while the thaayar is found at the lower tier. There are totally nine Narasimhars here (out of which five are in a row) like Ahobilam and hence is called Dakshina Ahobilam. Thus once can have darshan of all the main pancha divya desa moorthies – Ahobilam, Kanchi, Sholingur, Srirangam and Tirumala. There was a huge rock formation in the form of a lion with face, eyes, nose, mane and a raised right leg. Thulabharam prarthanai is practised here. It is believed that if childless couples pray to offer thulabharam, once their prayers were answered, their wish of childbirth is granted, and they come back with the child to offer gratitude. A small temple for Siriya Thiruvadi can be found in the mid-way while climbing steps.

The temple is believed to have been built during the Pallava regime. Popular festivals here are Srijayanti, Deepavali and Vaikunta Ekadasi. Lord Venkateswara Brahmotsavam is celebrated on a very grand scale in the Tamil month of Purattasi and Lord Narasimha has his parivettai utsavam in Panguni. It is heartening to note that all the shrines in the hill temple are well maintained, a testimony to the grace of Lord Narasimha and Venkateswara.