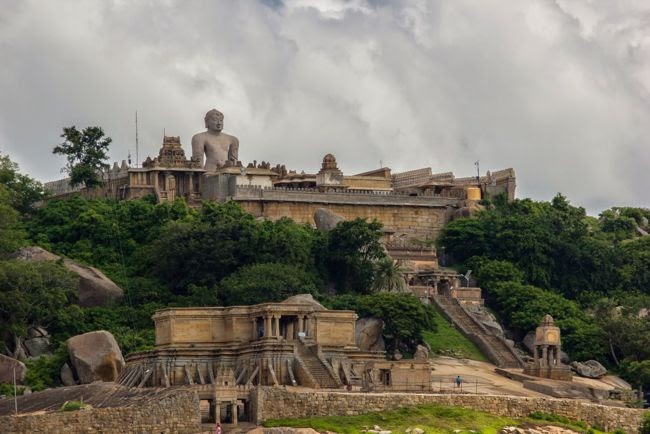 Prakash D May 17, 2018 Karnataka , Temples 0 Comments
Gomateshwara is the other name of Bahubali, the central deity enshrined in the temple of Shravanabelagola located in the Hassan district of Karnataka. The temple is situated at an altitude of about 3350m above sea level. The temple’s ideal location between the two rocky hills of Chandragiri and Vindhyagiri is a real feast to the eyes. Gomateshwara is one of the most famous pilgrim destinations of Jainism and is very important one in the History of Jainism in India. History says that the statue of Bahubali was ordered in 988 AD by Chavundaraya, a minister of the Ganga dynasty to fulfill the wishes of his mother Kalala Devi. The statue is made of a single rock of 57 feet tall. There are seven hundred granite steps made to reach the statue. This statue is deemed as the first one of the Seven Wonders of India.

Jainism is one of the ancient religions and came into being during the 7th Century BC in Eastern India. Jains idolize the 24 historical figures or Tirthankaras, “‘Ford-Finders” who uphold the path to cross the river of suffering and misery that is the mortal world. Situated on top of the Vindhyagiri hill at an altitude of 1020.16m, in the Temple Town of Shravanabelgola, is the giant monolithic statue dedicated to Jain deity Lord Gommateshwara, also known as Bahubali. The 17.37m tall granite statue weighs about 80 tons and is accessed via a flight of more than 500 steps. The site offers a picturesque view of the plains as well as nearby hills. In an SMS poll carried out by The Times of India newspaper, from 21 July to 31 July 2007, it was voted as the first of Seven Wonders of India on August 5, 2007. The statue is considered to be the tallest monolithic sculpture in the world.

According to the inscriptions at the base of the statue of Gommateshwara, it is said that Ganga Ruler Rachamalls’s able General and Commander-in-Chief Chavundaraya's mother, Kalala Devi, saw a huge statue of Gommateshwara in her dreams. She vowed not to eat until her dream was realized. Chavundaraya decide to build the statue of Gommateshwara at Sravanabelgola, a site already sanctified by the Jains. Another legend has it that Chavundaraya arrived at this place overshadowed by two hills, Chandragiri and Indragiri, with a pond in between, on his way to pilgrimage with his mother. In a vivid dream, Chavundaraya saw himself shoot an arrow from the summit of Chandragiri to the adjacent hill, as directed by Kushmandini Yakshi and the figure of Gommateshwara flashed from the spot the arrow hit. Following this he commissioned the curving of the same image from a granite monolith under the supervision of sage Arishtanemi between 980 and 983 AD. The valley between the two hills around the pond was named Shravanabelgola (‘Shravana’ meaning saint; ‘Bel Gola’ meaning white pond).

The north facing stone sculpture of Lord Gommateshwara is depicted in the upright posture of meditation known as Kayotsarga that is practiced to attain salvation by practicing renunciation, self-restraint and complete dominance of ego. The digambara (nude) form is typical of Jain traditions and it symbolizes one’s victory over earthly attachments and desires that hampers their spiritual ascent towards divinity. The statue has ringlets of curly hair and large elongated ears. His eyes are open in a face with perfectly chiselled features and are sporting a faint smile tugging at the corner of his lips. His face, smile and posture embody a calm vitality ascetic detachment. The statue depicts broad shoulders with arms stretched straight down.

The base of the statue depicts an anthill and a creeper is twined around both his legs and arms, blossoming into flowers and berries on the upper arms. The statue stands on a carved lotus flower, a symbol of his sainthood and divinity and is devoid of support from the waist up. The statue has linguistic significance with carved inscriptions in Kannada and Tamil, as well as the oldest evidence of written Marathi, dating back to 981 AD. The inscription is dedicated in praise of the Ganga king Rachamall who funded the effort, and his general Chavundaraya, who commissioned the statue for the fulfilment of the wish of his mother.

Bahubali was the son of Rishabhanatha, the first of the 24 Tirthankaras in Jainism and is also known as Gommatesha. The Gommateshwara statue is dedicated to him. From a 9th century Sanskrit poem, Adi Purana, written by Digambara monk Jinasena, the story of Bahubali is deciphered. Bahubali was born of the Ishvaku Dynasty in Ayodhya. He challenged the ‘chakravartin’ supremacy of his elder brother Bharat who had won over submission of rulers from the six divisions of the earth as well as 98 of his brothers. Bahubali won the three contests of the challenge against Bharat but was disgusted by all the violence that being a king entails. He subsequently abandoned his kingdom, family and other worldly attachments to become a Digambara monk. He meditated for one year in the kayotsarga posture to attain omniscience or ‘Gyana’ and became the first human of this kalpa (world age) to gain liberation (siddha).

The Gomateshwara statue atop the Shravanabelagola hill becomes the focal point of the “Mahamastakabhisheka festival” every 12 years. Mahamastabhisheka is translated as grand consecration and devotees celebrate this ritual by pouring 1008 vessels of water from scaffolding near the top of the statue. After the offering of water, the statue is anointed with a mixture of sugarcane juice, milk, and saffron. The statue is sprinkled with flower petals, turmeric and sandalwood powders along with vermillion. Devotees also offer valuable stones and coins made of silver and gold, in deference to the deity. The best time for the tourists to visit this statue is in the morning to get away from humidity and sunny weather. On top of the hill, there are shelters and drinking water facilities for the pilgrims.

A famous Jain Pilgrimage Center in South India and is situated between two granite hills, Indragiri and Chandragiri. A 17m high monolithic statue of Lord Gomateshwara standing atop the Vindhyagiri hills makes Shravanabelagola a World famous. All the jain pilgrims gather here once in 12 years to celebrate the Mahamastakabhisheka ceremony, the next festival will be held in 2030. Gommateshwara Statue is a 57-foot (17 m) high monolithic statue located on Vindyagiri at Shravanbelagola in the Indian state of Karnataka. Shravanabelagola is at a distance of 51 KM south-east of Hassan, the district centre. It is situated at a distance of 12 Km to the south from the Bangalore-Mangalore road (NH-48), 78 Kms from Halebidu, 89 Kms from Belur, 83 Kms from Mysore, 233 Kms from Mangalore and 157 Kms from Bangalore, the capital of Karnataka. It is well connected with State Highways and District roads.