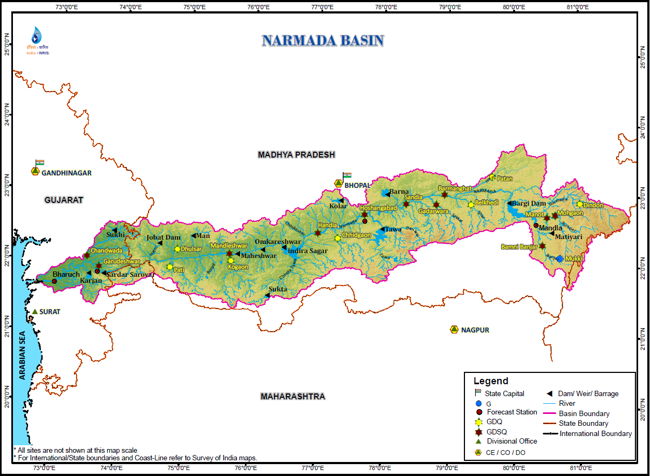 Prakash D September 29, 2017 Spiritual Knowledge , 0 Comments
Narmada is one among the seven holy rivers according to Hindu beliefs. It is the fifth largest river in the Indian subcontinent. River Narmada originates from the Maikal Mountain ranges (Amarkantak Hills) in the state of Madhya Pradesh. It flows in the Western direction (East to West) through a length of 1312 KM along two different Indian states, Madhya Pradesh and Gujarat, before merging onto the Arabian sea through the Gulf of Cambay near the Bharuch city in Gujarat. From a geographical point of view, River Narmada is considered as the divider between North India and South India. Right from the days of mythological epics, including Ramayana and Mahabharata, the Narmada river has found numerous mentions for its religious significance. Narmada is believed to be the daughter of Lord Shiva and hence the people of India worship the river as a Goddess (Narmada Maiya). The Narmada Jayanti festival is regarded as a popular religious festival in India and it is celebrated with great reverence in the Central region of the country.

While doing Narmada Parikrama, the devotees perform a full round of the Narmada river from its point of origin to the point of confluence and then come around to the source again. The whole journey through Narmada's Source-Confluence-Source is known as Narmada Parikrama. Traditionally, the holy pilgrimage of Narmada Parikrama is done in a clockwise direction. During the trip, the pilgrims visit various sacred temples situated on the banks of River Narmada and offer their prayers to the divine Mother. There is no hard and fast rule that one has to begin his Parikrama of the Narmada river from its point of origin. One may decide to do it in the opposite direction from Confluence-Source-Confluence. In-fact, you can start from any random point, travel along the river and return to the same point again on the opposite bank to complete your Narmada Parikrama. Overall a pilgrim is required to travel for around 2600 KM to complete the Narmada Parikrama.

Narmada Parikrama is an ancient tradition. Those days the pilgrims and sadhus (saints) used to walk barefoot along the banks of Narmada without carrying any money or food. One has to go out of his comfort zone to do the sacred journey. Common belief is that the more difficult the journey goes, the higher it is in terms of merit. Still there are a few devotees who prefer to do it in the old style, but the majority of pilgrims today make use of vehicles to move from one site to another. Now-a-days there are basically 4 different ways in which a person can perform the Parikrama of Narmada -

1. The old style, that is by walking all the way.
2. Using public transports like bus and jeep service.
3. Package tours offered by the travel agent/tour organizer.
4. Travelling by own vehicle.

There are a few unwritten norms or rules that a Parikramavasi (person doing the Parikrama) is expected to adhere to during his/her Narmada Parikrama yatra. These are -
Share This:
Facebook Twitter Google+ Pinterest Linkedin Whatsapp
Spiritual Knowledge
By Prakash D v�o l�c September 29, 2017