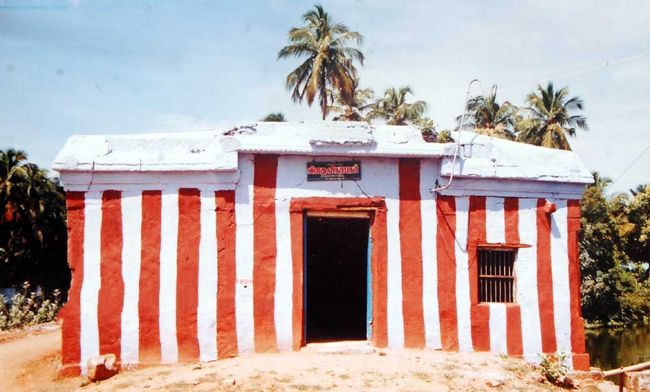 Prakash D September 28, 2017 Fascinating Facts , Ganesha 0 Comments
Well noted for his ancient origin, the temple was established well before 1000-2000 years. The farmers during deficiency of rain, worship their Rain Deity, the statue of god Pillaiyar by anointing his body with coating of pepper paste or powder and then clean it by pouring water. The holy pepper water flowing from his body is made to flow towards the Canal (Kalvoi in Tamil) which is located close to the temple. Thus the people believed for the rain to come. After gratifying their desire, (falling of rain) the farmers offer things or food to the people as a source of joy.

There was a king in Kerala who suffered from uncured disease. One night, he had a vision Where God said “King the only way you to be heal is that you have to construct a sesame doll of your size (made of Sesame seed) and put a diamond inside the size of a Tuardal - Red Gram. Then transform your disease to the sesame doll and present it to a Brahmin guy, thereby your disease will switch over to the Brahman guy”.

The king made a doll as god foretold in his vision. But no Brahmin was ready to take the doll, finally a Brahamachari Brahmin from Karnataka came forward and received the doll from the king. As soon as the doll came in Brahmin’s hand the doll got alive. The living doll asked the Karnataka brahmin “In order to prevent the disease from the king, you give me one part of your Gayatri reward. The Karnataka Brahmin gave the Gayatri reward but he worried for giving it. He got freighted to accept the disease at the same time grieved on giving the gayatri reward. To overcome his mistakes he thought of using the diamond for others use. He can’t guess how to use the diamond; therefore he planned to get advice from Aghathiyar at Podhigai mountain.

Before leaving he gave the doll to keep it safe to a trustful Andhanar (brahmin) at Ambasamudram and would take back after meeting Aghathiyar. Knowing a Karnataka Brahmin guy coming to meet, Aghathiyar gave more tests and challenges on the way, but the Brahmin overcame all the tests and struggles and reached the place. Aghathiyar was proud of him and agreed to give whatever his asks. The Karnataka Brahmin said all the details about the sesame doll… Aghathiyar said "My son the greatest donation is the water donation, when you walk down the mountain steep, you will see a cow, catch the cow tail and walk behind tracing the way, this is the way-mark that the Kalvoi (Canal) should be constructed.

Where ever the cow puts its dung construct a small dam there, Where ever the cow urinates construct a bridge there, Where ever the cow sleeps construct a pond there. At a certain distance the cows will stop and would vanish – dig a Kalvoi up to that, and with the remaining water construct a pond at the end said Aghathiyar. After getting the solution, the Brahmin came back to Andhanar to receive the doll and the diamond inside, but Andhanar deceit the Brahmin by placing dal instead of diamond. The Karnataka Brahmin was shocked on seeing dal, he ran to the king for being betrayed by Andhanar. The king was pleased to see the Brahmin who cured his disease and was proud for his thoughts. He called Andhanar and asked to give oath in front of Sivaliar (Sivan temple). Andhanar on taking false oath was burned alive.

Later the Karnataka Brahmin got the diamond, the place where he found the cow is Cheranmahadevi. In earlier days Cheranmahadevi, Ambasamudram rural areas where part of Kerala. Some believed that Aghathiyar himself was in the form of a cow. The Brahmin then constructed the Canal, dams, bridges, pond and finally the lake at PRANCHERY where the cow vanished. One could see the lake even today which is so vast like a sea. Unknown is the Brahim’s name, as the saying goes “Greats don’t reveal themselves what good they have done”.

Hence the people named the Kalvoi with his native language Kannada as “Kannadiyan Kalvoi”. After the construction of the Kalvoi the Karnataka Brahmin worried and prayed the water should flow in the Kalvoi - Canal - throughout the year. Things happened worse as expected by the Brahim, there was no rain for three years and the Kalvoi dried lack of water. He built a Pillaiyar temple close to the canal and worshiped the god Pillaiyar by anointing his body with pepper paste and cleaned by pouring water that was made to flow towards the Kalvoi, the heavens were opened, and the rain poured on……… Still now the people, mainly the farmers of Cheranmahadevi follow this way of worshiping during the time of drought.